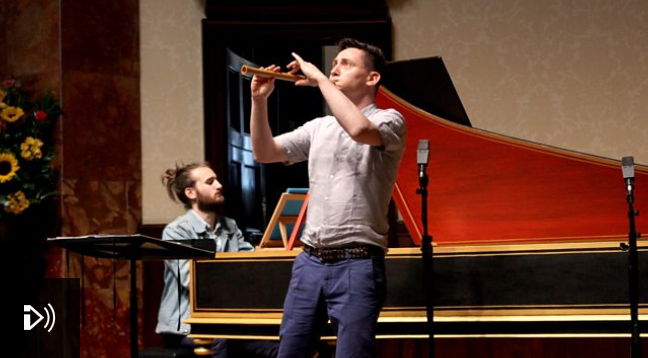 The concert in Kazakhstan was a huge success. Together with Berlin’s instrumental ensemble Lautten Compagney, Maurice Steger played at the EXPO 2017 in Astana and delighted the world’s ninth largest country with the first concert of baroque music featuring period instruments. From there he travelled straight to London. Listeners in the wonderful and very atmospheric Wigmore Hall had the pleasure of hearing Jean Rondeau and Maurice Steger play.

And what a great joy it was: a live recording by the BBC is still available to listen to until early August. In the city of Santander in northern Spain, Maurice joined forces once more with the harpsichordist Ignacio Prego, and together they brought a sophisticated audience to its feet.

Next stop: Venice. This year, Maurice Steger is professor at the Accademia Cini. The main focus will be on the music of Vivaldi. A brilliant team of instructors will teach more than 100 academy participants on the island of San Giorgio. Afterwards, Maurice Steger heads straight to Hungary and the Esterházy Palace, where he will conduct for the first time the famous Budapest Strings in the performance of early classical symphonies. As always, the masterclass takes place in Arosa and is once again fully booked with lively participants.

Immediately after the week spent in the mountains of the Grison Alps, Maurice Steger will travel to Alsace where – together with Nuria Rial – he will be recording a new album. For now the topic is being kept under wraps, but not for long. We are looking forward to it.

You are most welcome to attend one of the concerts taking place in this busy month of July!