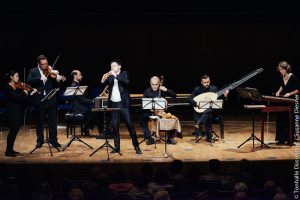 What a pleasure! Very soon now, the recorder player can perform in one of Europe’s most beautiful venues and present his audience with excerpts from his new project featuring the music of Vivaldi. And the press: Maurice Steger and Barocchisti meet with acclaim, music awards and great reviews from around the world for the CD Vivaldi: Concerti per flauto‘.

For many years now, Maurice Steger and the Zurich Chamber Orchestra have made an accomplished team. The conductor and recorder player served as the orchestra’s ‘Baroque Music Director‘ for a few years; today, the ZCO works together with Sir Roger Norrington, and also thrills audiences as a Baroque orchestra. During sold-out concerts at the Tonhalle Zurich, Maurice spirited his audiences away to the Venice of the early 18th century.

The Neue Zürcher Zeitung newspaper describes the concert as follows:

There is pure joie de vivre contained in the warbling and singing which Steger conjures out of the sopranino with such breath-taking finger acrobatics and skilful articulation. Together with the infinitely tensioned sweep of the largos, this creates the sensation that the rules of biophysics have been suspended. … This same joie de vivre was immediately ignited in the members of the Zurich audience, who attended in great numbers and were unstinting in their applause for the erstwhile local matador who has long since gone on to conquer the world’s arenas – and for the Zurich Chamber Orchestra. … This is largely due to Maurice Steger, who is not only a charming soloist, but also a conductor and team player who knows how to cast his fellow musicians in the most favourable light. (Jürg Huber)

And the Tages-Anzeiger writes:

On this evening, Steger as usual showed himself the Master of the Recorder Heavens, through which he floats on the cover of his CD.

Maurice Steger and his musicians then travelled to Düsseldorf in order to celebrate Italian music in that city’s Tonhalle venue. The event was moderated by Christian Ehring.