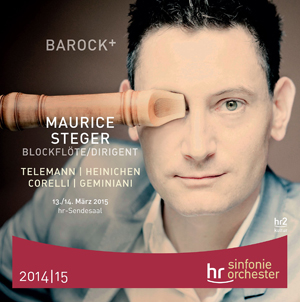 Riding the recorder on a roller-coaster of emotions

The star recorder-player Maurice Steger captivated his audience in Braunschweig with his virtuoso, charming and physical performance…

„“Experiences which transcend clichés are exciting. It was therefore thrilling that Steger already uncovers such dissolution of boundaries in Vivaldi. […] Goosebumps! In Vivaldi’s Concerto for Flautino, Steger then performed brilliantly again on his piccolo, and energetically irrigated Wagenseil’s Symphony in G minor with fast-paced, dynamic changes. Mozart’s Prague Symphony was also very three-dimensional, with echoes of melodies from his operas shining through. […] Much applause.”.“

„“The fact that Maurice Steger is not only a recorder-player virtually brimming over with joy in performing but also a conductor with a deep confidence of style was demonstrated with the richly nuanced and powerfully performed orchestral suite “La Bourse” by Georg Philipp Telemann, in which particularly the opening overture exuded warmth and grace. On this evening, it was the wood-wind players of the Hessischer Rundfunk Sinfonieorchester who had their work cut out for them: here, the oboes managed to shine time and again with their immaculate, full sounds. […] Corelli’s Recorder Concerto in F major was shaped by the soloist’s spirited playing, Geminiani’s Concerto Grosso by the highly homogeneous-sounding interplay of the two solo violins, the viola and the cello.”“