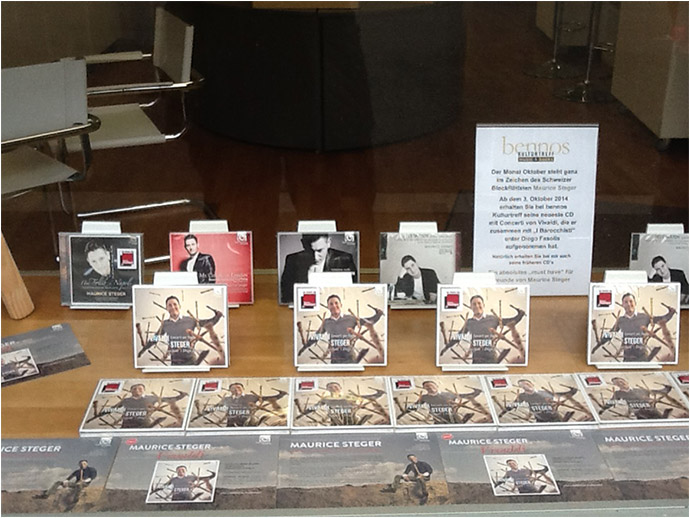 Joy! In the next few days Maurice Steger’s new CD: ‚Vivaldi: Concerti per flauto’ will be available in the stores europe-wide. The first reviews have been published:

“Virtuosissimo Vivaldi and Steger: two kindred spirits have been united in their passion for enchanting cantilenas and virtuoso coloratura, in their love of the recorder’s thousand tonal moods. Maurice and Antonio, a match made in heaven!”
HANSULI VON ERLACH

“Antonio Vivaldi’s recorder concertos? That used to be a reason to go to the cinema… such a clamour and rush. It’s eerie. Who can stop it? The use of a recorder? On the contrary! No sooner has Maurice Steger played a note on his little instrument when the rush continues. Yet it is more than that. We would hide this CD away somewhere immediately if this onslaught
did not contain ideas and sounds: the rush is the animated beating of a warm heart…”

“Champagne pour la flûte! The “new” Maurice Steger: a genius! Virtuosity, yes, of course. But the interpreter is the servant of the music, and not vice versa. Whether it is in the fascinating concerto ‘La Notte’, in ‘La Pastorella’ with its folk-like fiddle accompaniment, in ‘Gardellino’ and its cadences, or in the whirling concerto per flautino (for a small flute) RV 443 with which the CD opens – all effects sound light and natural, never like showing off. We simply must listen to the slow movements, the wonderful care taken with the embellishments, the depth of the sounds, and the phrasing provided by the music: it is a superlative pleasure to listen to!